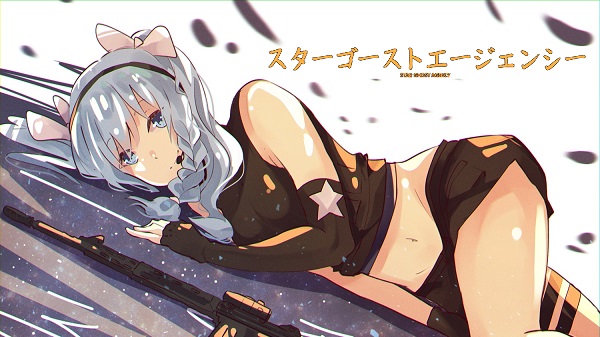 12/9/19 Author Note: Web novel cover has been updated. Special thanks to artist uikoui.

A day after my chat with Naoko, a high ranking uniformed woman came to me in person and introduced herself.

"Hello Hikaru, nice to meet you. I'm Commander Fuba.", the woman stated with a smile.

"You will be deployed to Training Camp in 08:00. Please gear up first.", the commander stated right away.

"Your gear is at this room's locker."

I then went to the locker and saw my combat uniform and an assault rifle next to it. The dark brown uniform consists a

The white star the agency's symbol printed on all of their uniforms or combat gears.

"Um... Why do I have sandal boots?", I glared at Commander Fuba.

As a second thought after asking that question, I actually do like those cute laced sandal boots.

"Naoko will become your Handler after your training. Also, your designated code name will be T89.", Fuba went back to

"T89 is short for the Type 89 assault gun that you will be mainly using. It is the gun next to your gear.", Fuba replied.

"Good luck with your training!", Fuba leaves the room.

After dressing up in my combat uniform, it felt comfortable to my amazement.

Once the stealth chopper dropped me at the Training Camp with my cadet batch, the drill sergeant greeted us.

We quickly went into a attention after his order.

"Cadets, welcome to Star Ghost Agency's Garia Forest Training Camp! I am Sergeant Toren. Since most of you were in

special forces, the training will last for 3 months because of our limited time. Also, you will be trained for fantasy warfare.",

"You will not speak unless I gave you permission, cadet! Do 50 push ups now!" the sergeant angrily shouted.

"Yes Mam!", the cadet replied and did push ups.

"Well, it will take 4 months for some of you.", Sergeant Toren commented.

During the 4 months of training for me, I basically did every single special forces military exercise. Examples is how to use

The drill sergeant eventually explained to us that he is a former US Navy Seal operator. But, he is considered dead and a

ghost because he's a Star Ghost Agency agent. The United States is the only country secretly aware of the agency

Once the 4 months of training has passed, Naoko came to the camp and briefed me about the cyborg abilities.