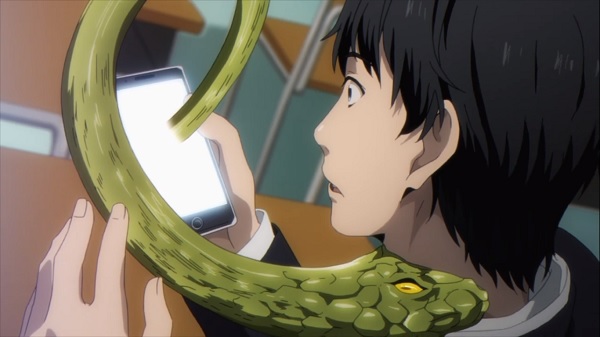 Darwin's Game is about a real life mobile battle royale game of players surviving from duels. On this episode, Kaname accidentally launches Darwin's Game and instantly got into a duel against the panda mascot rookie killer. Later, he encounters a player named Shuka.

Whoa, the introduction is very interesting and even has longer time (around 44 minutes) than the average episode duration (24 minutes). It was nice to see our male lead accidentally get involved in the real life death mobile game and learns about the in-game functions while surviving. Also, the action scenes is nicely dark and seems to be similar to the Sword Art Online series. Other than that, since I've played a lot of mobile games, this anime definitely aligns with my interest and especially it has a lot of basic mobile gacha game references. Now what's going to be the next plot? I definitely can't wait to find out. Overall, interesting long introduction and nice dark action.