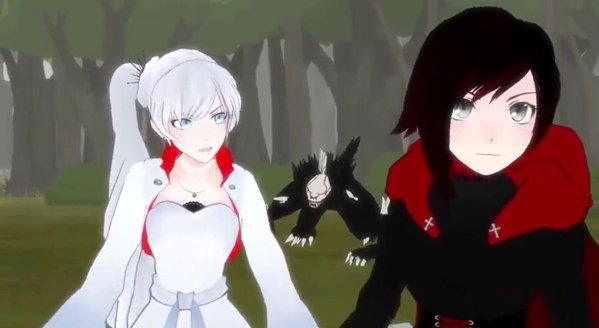 RWBY is a pretty interesting anime style shorts series by Rooster Teeth. The creator is the same guy who goes by the name Mounty Oum who created a popular fan made crossover series between Final Fantasy and Dead or Alive.

So in some sort of way, this series kinda quite similar to Iron Man Armored Adventures (which was aired on Nick Toons) because of the graphics except that RWBY is in anime style. Also is it just me or Nora has the almost same exact somewhat annoying voice of Pepper?

Putting that aside, the story so far about going against the darkness is cool (but is typical or average) and the characters have nice designs (especially their outfits). However I'll mention again that I'm not a huge fan of CG (computer graphics) but since it's created by Mounty Oum, I'm definitely okay with it. The action scenes are awesome just like in Dead Fantasy.

Note: Just to point out or simply verify, my definition of " in anime style" is a series I don't consider as actual Japanese anime which I mainly post about. Another example is something like Legend of Korra (current series for 2nd season that I'm waiting for to come out).