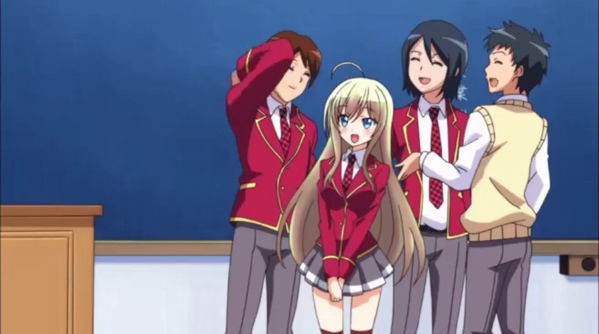 Okay, the protagonist is starting to officially remind me as a male version of Natsuki from the previous season's series called Kitakubu Katsudou Kiroku (or Chronicles of the Going Home Club). In similarity, they're both logical and try to correct their illogical friends in a shouting tone. Also they both complain a lot in random unexpected situations and deal with them anyway. So putting that aside, on this episode, Chocolat starts going to school. Then our male lead counters more problems and gets another complicated mission for the next episode.

Might have mentioned this before but the series is just getting funnier on every single episode after another. Also it's hilarious to see God interfering with our male lead and we also get to see more details about Absolute Choice curse. Now I actually don't see anything that generic that you would see in other echii/harem anime so far. It just seems like there's a bunch of new elements and is going to a new direction that other comedy focus echii/harem has not gone before. I'm overall impressed and as usual, can't wait for the next.

Conclusion: Another nice funny episode and shows Chocolate going to school for the first time.