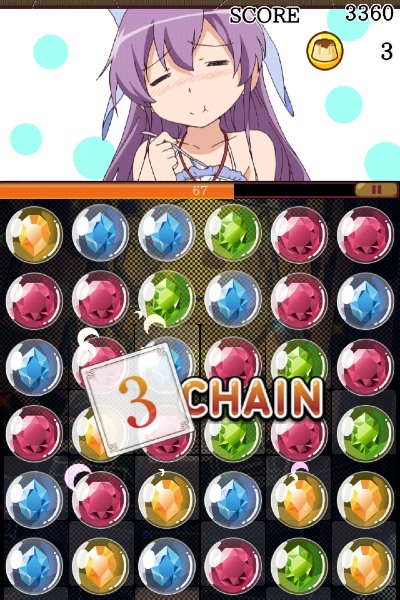 Ryugajyou-nanana Puzzle is a fast paced timed puzzle game based on the series, Ryuugajou Nanana no Maizoukin. The goal is to match threes just like a Bejeweled game. However that's not the only goal. You get to earn the currency called Purin (or also known as pudding in Japanese) from each round which you can spend on temporary bonuses that lasts per round and also unlock content for the Gallery.

So the nice feature about the game besides being an average puzzle game is that it's voiced by Nanana (the main heroine) herself along with pictures shown in the anime or manga every time you match. Also another nice thing is that the game can be played offline which means you don't need data or internet to play it while you're on the go. In conclusion, it's probably one of the best arcade games that can be played offline I ever played especially that it's voiced.

Note: Available in the Japanese app store. The menu and upgrades is in simple English except for certain descriptions.