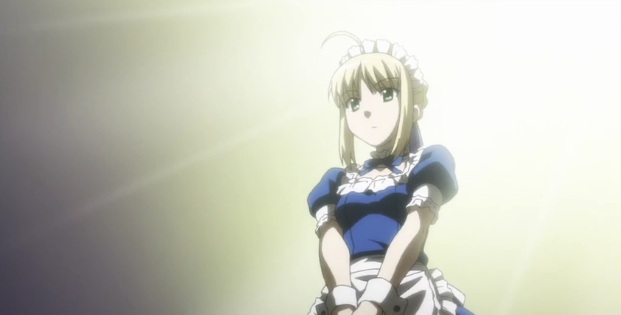 Wow, a Fate series fan service. Saber in a maid outfit... If that was in the actual Fate series, it wouldn't make any sense or even fit with the theme unlike Last Exile: Ginyoku no Fam episode 5 where they randomly placed a maid outfit on the princess. This is acceptable on this episode because it's OVA like and it's basically like again on what I mentioned on my previous post; characters from different anime from the same company (Type-Moon) colliding with each other in a world. I just basically want to point this out.

Anyway, besides that; this anime short episode did a decent job on this comedy having Saber working at a cafe even though it seems a bit generic compare to other fan service anime. The only different thing about this compare to the rest is that there isn't really any "echii" stuff. It was just quite funny and the ending was pretty neat. But, the sad thing is Lancer keeps getting picked and teased on since the first season of Fate (Fate/Stay night). Well, best of luck to Lancer.